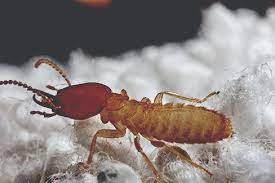 There are about 300 different Termite Species in Australia, but fortunately, only a few of them cause damage to crops, timber, and other wood-based products. Almost every termite plays a significant role in the ecosystem through the recycling and decaying of other organisms, which serves as a source of food for plants and other organisms.

Termites have different feeding habits and food types. This has made it very easy to identify the species of termites that cause the infestation to create an avenue to provide the most effective control over them. ‘

In this article, we will describe the three species of termite that are known to cause infestations in Australia.

Types of termite species in Australian

Termites are classified into three ecological categories based on their nesting and feeding habits; they are known as Subterranean, Drywood and Dampwood.

The subterranean termites are termites that attack timber in buildings and are known as one of the most destructive pests in the entire world. While outdoors, they mostly attack dead wood in contact with the soil, such as fallen trees, tree stumps, and fallen branches. Typically, these termites prefer woods that is rotten already, because it is easier for them to digest, although they can digest strong woods and it takes more effort.

Subterranean termites need a moisturized area to survive, that is why they make their nests in or near areas that can quickly obtain moisture from the soil. They tunnel through the soil to access timber, and in dry seasons they tunnel deeper into the soil to reach a moisturized

Searching for food depends on the weather, which leads to little activity during dry weather conditions or winter and a high level of activity during summer after rainfall. In tropical areas, they can forage all year round, and peaks during warmer, wetter conditions.

Drywood termites Species live in small colonies, mostly less than 1000 individuals, wholly inside pieces of timber. There may be other small colonies inside a single piece of wood or object such as a piece of furniture. They can feed across annual rings, so the galleries but they tend to avoid heartwood. They infest both softwood and hardwood. The termite colonies can grow for many years undetected until the timber breaks. Then they leave the nest to pair up and find a new site to mate and start a new colony, usually not far from the main territory.

Dampwood termites Species mostly infest decayed wood that is moist due to contact with the soil or, for example, through a water leak in a building. They are mostly infesting outdoor timber, such as a tree, stump or logs that are in contact with soil. Dampwood termites Species live inside the timber that they feed on and create extensive open galleries.

Do you have termites? Let Queanbeyan Pest Control handle this problem for you. We have combination of experience and expertise that will exceed your expectations when dealing with termite pests. Call us NOW on 0488 404 885.