An assessment of sustainability of a green residential building in an urban setting: focus in Pueblo de Oro, Cagayan de Oro City

Abstract. A study of the technical, economic, environmental and architectural aspects of green residential building situated in an urban location has been performed. The results of the study revealed the following: the building has been observed to be properly oriented with minimum levels of lighting consumption and sufficient lighting designs, and that with the implementation of the green rooftop, restoration and plantation of different species of plants a considerable amount of carbon has been offset for the growing of the plant at approximately 470 tons of carbon for the 20-year time horizon.

The calculated estimates reveal that with this strategy, it can mitigate approximately 21,000 kg of carbon dioxide emitted to the environment and approximately2,100 gigajoule of primary energy is avoided; as to building’s indoor environmental quality, the results of the study indicates that the resulting design have achieved the maximum natural ventilation possible. As to acceptability of the green building, the survey results as per statistical analyses revealed high level of acceptance of respondents in terms of the overall satisfaction features, the general and the specific features and the given psychological indicators of the design.

Introduction. There is a global consensus that anthropogenic emission of greenhouse gases in the atmosphere causes the increase of temperatures on the surface of the earth and that this has facilitated climate changes faster than normal (Stern 2007). These emissions caused by anthropogenic enormous growth and development heavily rely on carbon-based fossil fuels to supply these developments. At present, the effects of climate change due to global warming has been recognized and that there have been actions at all levels, i.e. government, private enterprises and professional to mitigate the impacts of these man-made climatic changes or even to adapt with the current climatic changes.

Emissions of carbon dioxide from fuel combustion, in conjunction with that emitted from cement factory, are responsible for more than 75% of the increase in atmospheric carbon dioxide since the pre-industrial 18th century (Solomon et al 2007). The construction and occupation of buildings is a substantial contributor of carbon dioxide emissions, with almost a quarter or 25% of the total carbon dioxide emissions attributable to energy use in buildings (Metz et al 2007). A further 5% can be attributed to the manufacture of cement which is a principal component of building construction material. Thus, there is really great interest in this area to reduce the energy demand and the consequential carbon emissions attributed to buildings construction and operation.

The aim of this study is to compare the standard or traditionally-designed residential building with that of a proposed set-up which is designed as a modern green residential building situated in the local setting. This study focused on the present research gap, which is to answer whether indeed there is an environmental benefit in the design and construction of green buildings. Problems associated with each key element of sustainable developments shall be addressed in details, such as site selection and development, energy use, water conservation, environmental quality and social or community acceptability.

In site development and selection it is expected that issues related to proper building orientation and indoor air quality shall be addressed; in energy use, key problems related to increase in energy demand as the building size increased shall be discussed, and key issues related to improved indoor air quality shall be investigated and ecological parameters were measured and monitored for three months. Foremost to the study is to determine whether the expected green building shall pass social and community acceptability.

Material and Method. The global consensus that the present trends in the construction of building which of a considerable portion are residential units cannot be sustained without inflicting damage to the environment. Residential units, be it in the construction stage or in the operation stage, contribute significantly to the overwhelming demand of energy and thus demand for fossil fuels. In the field of architecture, the culprit of this dilemma is the omission or perhaps failure in the field of looking for another element in any architectural design which consider the “fragility of the Earth”. As of now, the gap in the design of standard or traditionally-designed units is clear that previous trends does not account the environmental impacts of building constructions and/or operations for a variety of reasons, the most obvious is the costs associated when such element is totally addressed.

In line with the overall objective of quantifying the advantage of sustainable housing unit compared with traditionally designed residential unit, the conceptual framework emphasizes the need to subject the standard architectural design into five major sustainable test standards namely: (a) sustainable site and development, (b) water use, (c) energy use, (d) material and resource use and (e) indoor environmental quality. In the evaluation whether what constitutes sustainable designs, the work combined the standard features of sustainable architecture and globally accepted standards for determining sustainable designs such as Leadership in Energy and Environment Designs (LEED).

The design concept as shown in Figure 1 shall be subjected to technical, economic, environmental and architectural assessment to determine whether it is within the scope of the standard scheme of constructing residential buildings. As an added feature, the research methodology incorporate social acceptability measure so as to ensure that the implemented design shall be socially acceptable to the public. Survey questionnaires shall be given to random participants and their comment shall be made basis for revising the design plan during the implementation process and if necessary, as an adjustment after the construction stage.

Site selection and development. In the construction of the green building the research has chosen the following practical design and research strategies: (1) proper orientation of the residential unit, (2) site selection that improves the existing site, (3) site development which incorporates carbon abatement strategies, i.e. green rooftop and site tree planting as part of the residential design. An analysis, evaluation and calculation as to how much carbon is abated by using these strategies was made; the calculation was done by estimating the amount of carbon in each individual strategy has abated during the construction up to the whole lifespan of the green residential building. For comparative purposes, the same strategy is applied to a traditionally-designed building in the same subdivision, i.e. carbon footprint comparison, others.

Figure 2 shows the calculated energy gains for a three month period, while Table 1 shows the amount of equivalent carbon derived in incorporating the green rooftop and the plantation of plants on the site.

The calculation of equivalent carbon dioxide taken from the atmosphere for the consumption of biomass may reach approximately 23,000 kg of carbon dioxide yearly or a total of 470 tons for a 20-year time horizon. From a global point of view, the amount of carbon dioxide reduced may be insignificant and obviously the economics of the increased cost associated with the employment of site selection and development strategy may not be quantifiably justified. However, it may be safely argued that there is a true test of sustainability in these site selection and development strategies as it is apparent from the calculation that the impact of construction of buildings in terms of carbon dioxide and in terms of primary energy has been mitigated and reduced respectively.

Energy use. Daylighting and the use of efficient energy consuming lighting and air conditioning features were employed for the green building to reduce the energy consumption of the building.There is a growing body of literature on embodied energy and carbon in the construction of houses. Studies typically use a process based Life Cycle Analysis (LCA) methodology (bottom up) rather than an input–output (top-down) methodology. Individual process based studies have used different parameters, factors, datasets and boundaries. In addition, values of embodied energy, and consequential emissions of carbon, vary by country due to: the energy mix; transformation processes; the efficiency of the industrial and economic system of that country; and how these factors vary over time (Sartori & Hestnes 2007).

As shown in the Table 2, there is a substantial difference at approximately 40% in energy usage for the green building design based on energy usage per size of floor area, i.e. in watts electricity used per square meter of floor area. This means that the building is approximately 40% more efficient than that of the traditionally designed building in terms of operation of the building. Nässén et al (2007) summarized the results of 20 process-based (predominantly Scandinavian) studies published prior to 2001. The studies showed similar results with a range of 1.3–7.3 GJ/m2 primary energy for residential buildings. 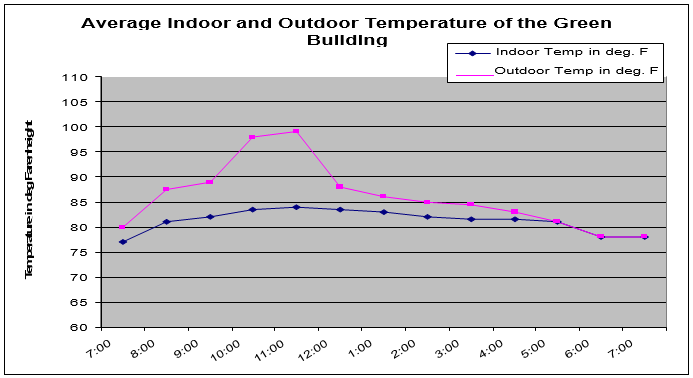 Figure 4. Measured indoor and outdoor temperature of the green building.

Improved environmental quality. The use of natural ventilation design and proper orientation of the building were integrated into

the design of the green building. Simulations were made to determine the optimum level of daylight

humidity and pressure differences were measured to obtain proper ventilation of the building.

As illustrated in the graph and observed in the green building, indoor temperature is almost stable during the measuring periods in spite of rapid variations in the outside air temperature. The foregoing results can be attributed to a number of factors inherent in the green building design. One of such factor is the efficient natural ventilation occurring in the building and the use of proper insulation materials that reduces energy gain coming from the roof during the day time. Temperature measurement were not taken during the period starting 7:00 PM up to 7:00 AM, nonetheless is safe to assume from observation of the building occupants that temperature drops below of that measured at 7:00 PM in the previous day. It has been observed that due to prevailing indoor air speeds inside the building, considerable number of the windows and doors in the northern portion of the house is closed to maintain a comfortable temperature inside the house.

Social acceptance. In order to measure the social acceptability of the green building, survey questionnaires were administered to a number of varied respondents on the following aspects: as to overall satisfaction, specific features and some psychological features.

This is an open-access article distributed under the terms of the Creative Commons Attribution License, which permits unrestricted use, distribution and reproduction in any medium, provided the original author and source are credited.

How to cite this article: